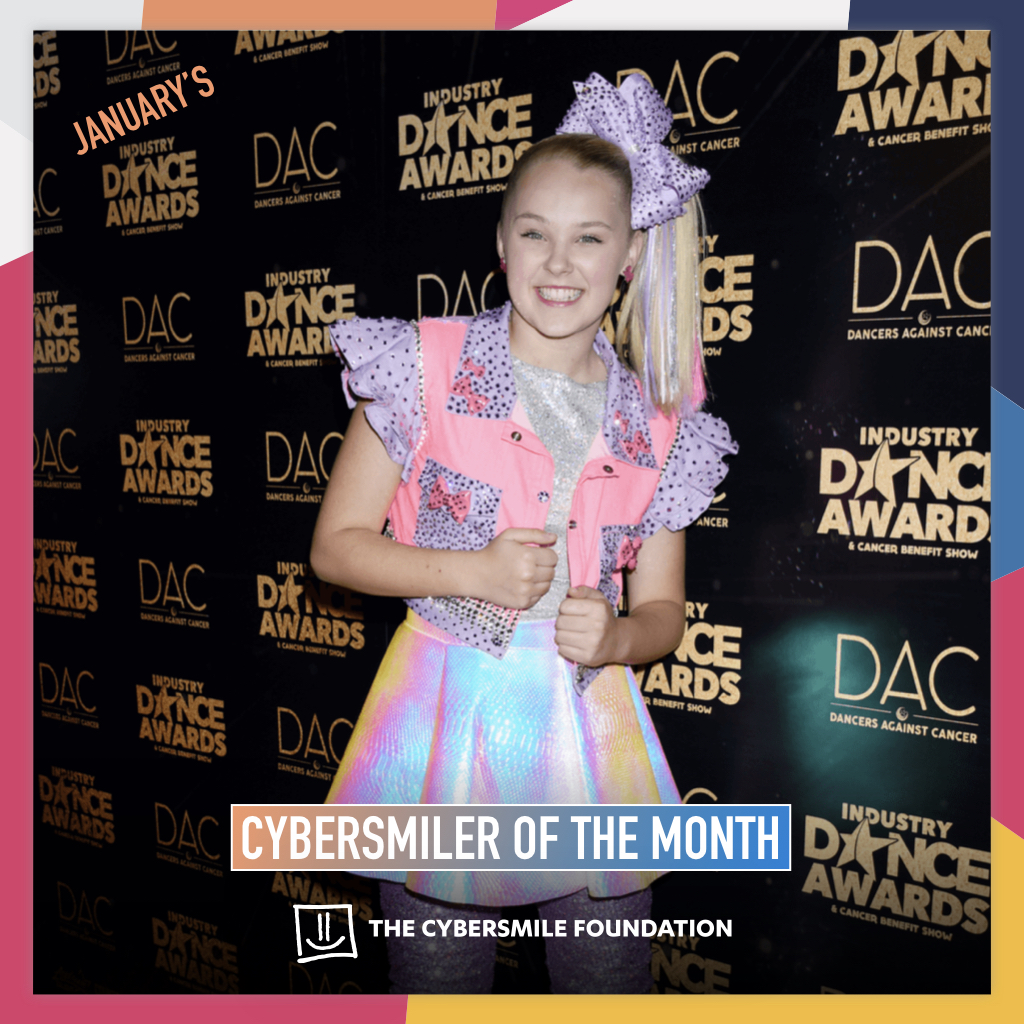 JoJo’s 'coming out' has been described as ‘unprecedented’ by LGBTQ+ advocates and supporters who are in awe of her bravery and the incredible impact she has had on the young people who make up a large part of her audience. If you are affected by anything touched on within this article, follow the links to our various support services or click on the blue logo icon at the bottom right of the screen to start using Cybersmile Assistant, our smart AI support assistant.

Cybersmile are proud to announce singer, dancer, actress and YouTube star JoJo Siwa as the first Cybersmiler of the Month Award winner of 2021. JoJo joins the likes of Lindsey Vonn, Daisy Edgar-Jones and John Legend in the Cybersmile hall of fame for her bravery in opening up publicly about her sexuality and empowering millions of people to be proud of their own sexual identity.

The powerful event occurred after she posted a lip-sinking dance video to Lady Gaga’s iconic track ‘Born This Way’ to her millions of fans on social media. Although many of her fans already knew what this meant – responding instantly with a wave of support and joyous celebration, the star later went on to confirm her coming out announcement in a follow up video on Instagram – thanking her fans for their love and support, and offering inspiration to young people all over the world.

“I think coming out has this stigma around it, that it’s a really, really, really scary thing. It’s not anymore. There are so many accepting and loving people out there. Of course people are gonna say it’s not normal, but it’s your normal.”

JoJo Siwa, Cybersmiler of the Month

JoJo’s amazing ‘coming out’ has been described as ‘unprecedented’ by LGBTQ+ advocates and supporters who are in awe of her bravery and also the incredible impact she has had on the young elementary schoolers who make up a large part of her audience.
https://twitter.com/itsjojosiwa/status/1352719582977355777?s=20
Traci Gillig, Assistant Professor at Washington State University who studies the impacts of LGBTQ+ representation on young people commented on the phenomenal online event saying – “JoJo’s pride in her identity and her confidence in shrugging off negative responses indicates that her social media presence will foster a sense of supportive community for LGBTQ youth, she’s one more voice – and a big one – communicating to young LGBTQ people that they are loved.”

“The impact of JoJo’s video is truly phenomenal. She has single-handedly made this life-changing announcement to the world in her own unique way – connecting authentically with her audience. The huge outpouring of love and support she has received shows us how important meaningful LGBTQ+ conversations are to young people.”

Everybody at Cybersmile HQ are proud of JoJo’s bravery and are excited to start 2021 by awarding her the much-deserved Cybersmiler of the Month title for the month of January.

What are your thoughts on JoJo’s incredible bravery? Let us know by contacting us or tweet us @CybersmileHQ.