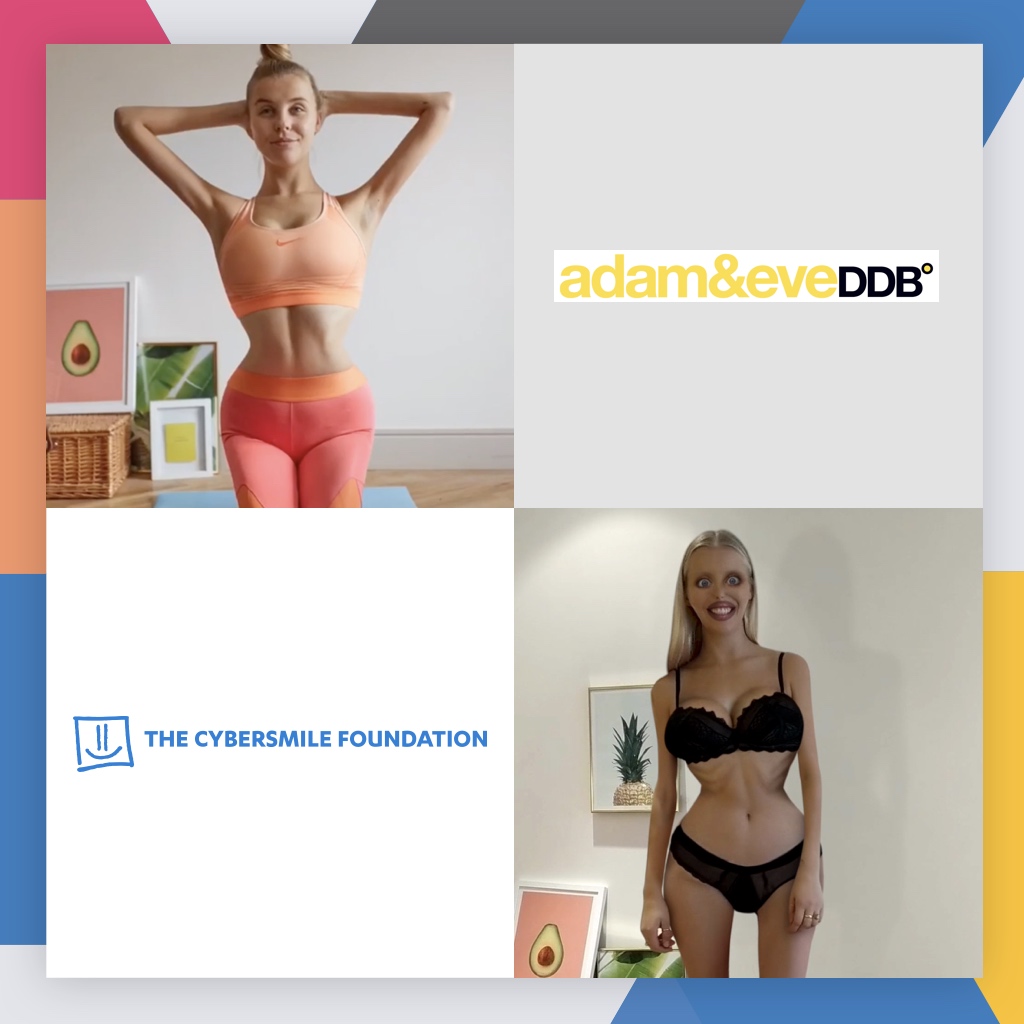 Communications agency Adam&EveDDB wanted to work with a charity partner to address trolling and harassment on social media – an issue that was affecting their staff members, clients and the wider community as a whole. Teaming up with Cybersmile in early 2018, a Body Positivity campaign was developed and launched with Instagram star Chessie King. The campaign became an internationally recognized initiative with coverage from the world’s most recognized news organizations and publications in over 10 countries.

The objective of the campaign was to highlight the scale of the problem and to show the potential impact that negative and abusive comments on social media could have on young people.

To begin the campaign, Chessie released a series of photos and videos of herself discussing how she had worked hard to finally be comfortable in her own body. Chessie received a high number of abusive messages and in response to the abusive comments she was receiving on her Instagram, the video content was altered in real-time relative to the abuse she was getting – showing the impact that these kinds of comments can have. This was then edited into a video and released, showing the transformation from her natural self into an unrecognizable person.

Ahead of the campaign launch, Cybersmile worked closely with adam&eveDDB to strategize the video concept and identify an Instagram influencer who could carry the message of the campaign, and feel comfortable participating where there would be the potential of negative comments. A number of influencers from a diverse background were carefully selected and approached before Chessie King was cast for the campaign.

Chessie’s involvement in the campaign and her enthusiasm to get the message across was a perfect fit, and so the campaign went into production.

“I’m working with Cybersmile as this campaign is spreading such an important message. Trolling can affect anyone, from a 16-year-old who has 100 followers to a celebrity who has over 1 million followers and these can have extreme consequences. I have been through an exceptional amount of trolling these past 6 months since I’ve opened up more about my life on my Instagram platform and this has attracted such negativity from trolls and haters. Trolling is such an important issue to tackle.”

Having personally experienced online abuse herself, Chessie was able to identify with the themes of the campaign and what it would mean if she could educate and help others experiencing it too – something that was personal for her.

Communications agency adam&eveDDB recognized the severity of the problem and had approached Cybersmile at the start of 2018 to find a way to address cyberbullying with an innovative social media campaign that would also include a viral video concept. With the support of their in-house production teams and photo editors, Adam&EveDDB and Cybersmile worked closely for the next few months in London to finalize the messaging of the campaign and put a PR strategy into place post launch.

“The statistics surrounding the effects of cyberbullying, particularly on young women, are shocking. It’s been truly inspiring working with Chessie and Cybersmile; both of whom are doing brilliant things by speaking out and lending their voices to such an important and pertinent cause.”

Once the campaign was launched, adam&eveDDB and Cybersmile began to approach a number of journalists and contacts to highlight the campaign topic and how it could make a difference to people’s lives. The response was overwhelmingly positive and a large number of outlets covered the campaign in several countries, and also encouraged their readers to support it.

The virality of the campaign meant that people from around the world were discovering the Body Positivity campaign from local, national and international media news channels – learning about Cybersmile for the first time. This started a number of important conversations on social media covering various subjects including body shaming, trolling, self-image and self-esteem in more than 10 countries, across Latin America, the U.S., the European Union and in Asia. Teens as well as adults and in particular, industry professionals in the media, shared their opinions about the campaign and how it affected them.

The campaign was covered extensively in publications around the world including mainstream media and promoted through numerous video publishers. Below is a small selection of news organizations that highlighted it.

The video of Chessie receiving comments from trolls and her transformation resonated with users of all demographics across social media in multiple countries. This highlighted the power of social media and the effects trolling can have on others, with a positive response from internet users. Below are some of the key stats of the campaign.