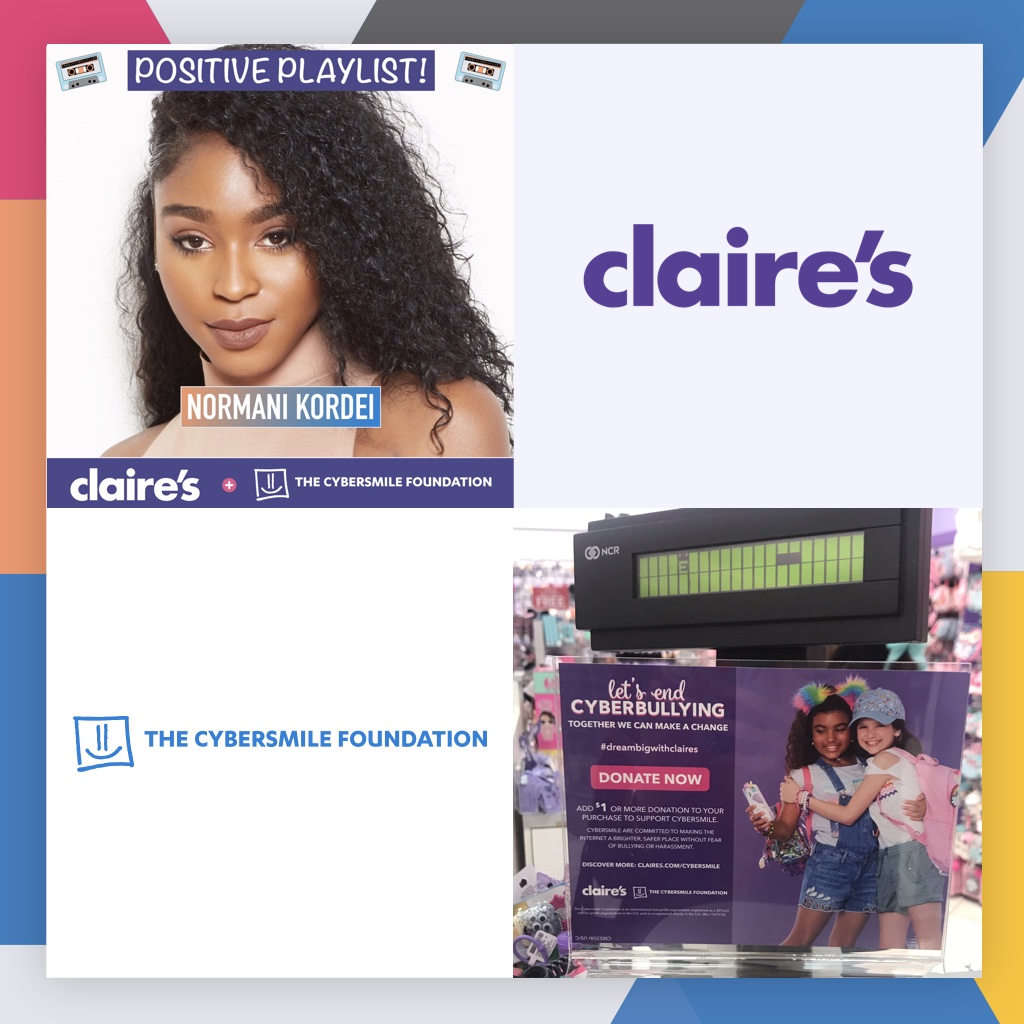 Cybersmile and Claire’s worked together to develop an awareness based fundraising campaign for Bullying Prevention Month with the aim of inspiring young people to follow their dreams without letting bullies and online negativity stop them from doing what they love. The #DreamBigWithClaires campaign also educated children and teenagers about the effects of cyberbullying and how to ask for help when dealing with difficult situations online.

Prior to the launch of the campaign, Cybersmile and Claire’s worked proactively behind-the-scenes to create a series of co-branded assets that included quote cards and graphics for use on both websites and for distribution via multiple social media platforms. Claire’s was also featured prominently on Cybersmile’s social media headers as well as occupying the primary banner position on the official Cybersmile website throughout the month of October.

Launched at the start of October 2017, the campaign shared the co-branded, inspiring and educational quotes and assets on social media throughout the month which also included a bespoke content hub on the Claire’s website promoting Cybersmile’s Golden Rules for navigating a safe and positive online life. The hashtag #DreamBigWithClaires was used to create a sense of community which offered everybody a chance to be involved in the campaign. Stores across North America, Canada, Europe and the U.K. took part in the campaign with in-store decorative assets and by offering customers the opportunity to support the campaign through a donation at the point of sale.

As part of the campaign, Cybersmile and Claire’s launched a #DreamBigWithClaires giveaway. The prize was made up of a number of popular Claire’s products and also included signed celebrity t-shirts and official Cybersmile merchandise.

Co-branded Positive Playlists from Cybersmile’s celebrity ambassadors were also released throughout the duration of the campaign from the likes of Normani, Johnny and Lauren Orlando, and Paige Spiranac.

The campaign has enabled Cybersmile to help over 43,000 children affected by cyberbullying and online abuse.

Claire’s decided to choose Cybersmile as the charity partner for the campaign due to the strong brand and demographics alignment. Cybersmile was considered the best organization for the important message that the retailer wanted to send out to young audiences around the world.

“We’ve teamed up with a leading international anti-bullying charity, Cybersmile, to tackle this issue. Here at Claire’s we’re dedicated to drawing attention to the harmful effects of cyberbullying and providing expert advice and support to those affected around the globe. Together with Cybersmile, we’re working to build a safer and friendlier digital community, where young people are able to follow their dreams and achieve their goals without the threat of online abuse.”

Claire’s proactively promoted the partnership and released a series of social media posts and supporting blogs. Ahead of the Bullying Prevention Month campaign, the retailer also created signage to help support Claire’s customers in-store, showing them how to donate and where they could find out more about dealing with cyberbullying and online negativity.

“With most of our customers being exposed to the social media world, where they can sadly experience cyberbullying or negativity online, we are really pleased to be working alongside Cybersmile throughout October. Here at Claire’s we believe in all our girls to be able to follow their dreams, think big and positively encourage each other whether it’s through social media or in person making our #DreamBigWithClaires campaign the perfect platform to speak to our girls against cyberbullying, allowing our valuable customers to know we are there for them and part of a great cause.”

The campaign produced a stream of positive and educational messages for Claire’s customers, while the giveaway offered everybody the chance to be involved in the campaign without geographical limitation – opening up the campaign to the rest of the world. This gave Claire’s an opportunity to showcase some of their new and existing products to multiple territories.

Internet users around the world were able to participate in the #DreamBigWithClaires online activities. Although the campaign was primarily aimed at children and young teenagers – parents, and young adults were also very keen to participate. With the release of several Positive Playlists, new audiences were introduced to Claire’s and Cybersmile – and were engaged in a fun, uplifting campaign where they could also appreciate the favorite songs of their idols – who also promoted the campaign.

Trolls and bullies love when you give them a reaction – why give them what they want? #DreamBigWithClaires @claires pic.twitter.com/iuePHUbB4k

The partnership received a variety of news features in mainstream media publications, local news networks and their affiliates. The campaign was also featured on ABC’s Bay Area News with Cheryl Jennings during Bullying Prevention Month. Below are a number of outlets that covered the partnership:

The campaign reached a large, diverse audience thanks to a well managed social calendar and the participation of influencers and Cybersmile Ambassadors. With diverse activations throughout the month, the campaign was able to galvanize support from people of all ages from all over the world. The social reach of the campaign can be seen below.

The campaign aimed to inspire and educate Claire’s customers and the wider public through encouraging and informative messaging and assets. The campaign also aimed to raise vital funds for Cybersmile’s Global Support Service – expectations for both objectives were achieved and exceeded with the #DreamBigWithClaires campaign.