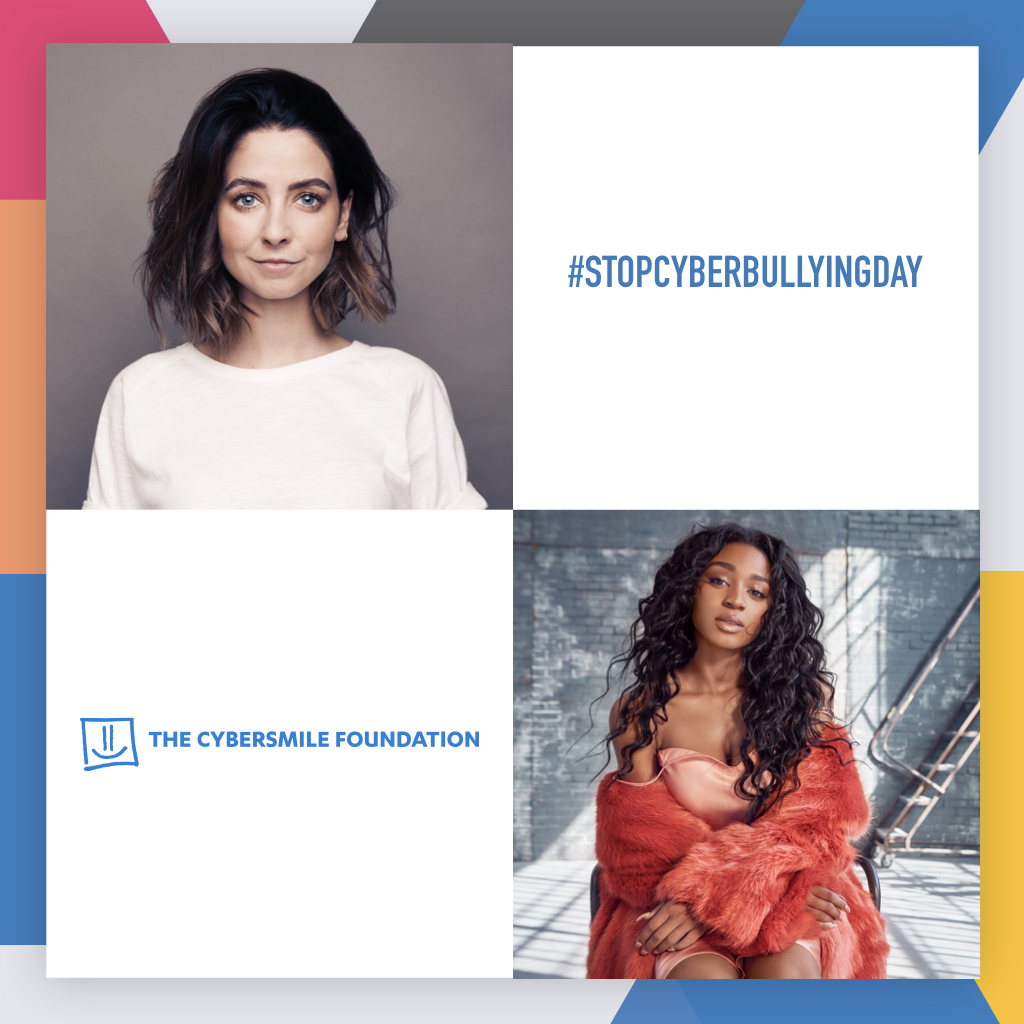 Activities will run for the next 24 hours to raise awareness of cyberbullying and online abuse, while encouraging people to be kind online. If you are affected by cyberbullying or anything else touched on within this article, follow the links to our various support services or click on the blue logo icon at the bottom right of the screen to start using Cybersmile Assistant, our smart AI support assistant.

Stop Cyberbullying Day is back and bigger than ever! For 2019 we are bringing together even more internet users, brands, influencers and governments around the world and encouraging them to promote kindness and inclusion online.

Following the success of last year’s event which reached over 101 million internet users and was supported by 750 influencers and brands including Zoella, Normani, Stephen Fry, ESL, Twitter, WWE and Claire’s – Stop Cyberbullying Day 2019 is going to take social impact to the next level with a host of global events planned throughout the day.

“We are truly grateful to have had the opportunity to coordinate Stop Cyberbullying Day 2019. It is a fantastic day for internet users, educators, brands, governments and influencers to lead the way and set the right example for the future of the internet.”

Activities will run for the next 24 hours to raise awareness of cyberbullying and online abuse, while encouraging people to be kind online. Live events, initiatives and campaigns will take place across all five continents of the world and will be promoted on most of the major social media platforms including Twitter, Facebook, Instagram and YouTube.

In the build-up to the day, schools around the world have been encouraging children of all ages to create anti-bullying artwork and banners that will be shared on and offline throughout Stop Cyberbullying Day.

“Stop Cyberbullying Day is a reminder that we’ve made a lot of progress in combating cyberbullying and digital abuse – but there’s more work to be done. Through the great work and research underway with our partners, we will continue to make strides towards a safer, more inclusive internet experience for all!”

Pope Francis will launch from the Vatican, a special 24-hour Stop Cyberbullying Day telecast to bring together thought leaders from around the world to discuss all aspects of online civility.

Activities to support and promote the day will take place both on and offline. Some of the planned events include:

A 24-hour live telecast will be launched with Cybersmile’s partner Scholas Occurrentes Foundation, bringing Stop Cyberbullying Day to a network of 500,000 schools around the world, with teachers, parents and children taking part in fun activities throughout the day both on and offline. A live conference as well as public service announcements will be broadcast during the Stop Cyberbullying Day live telecast, with thought leaders in health, science and education discussing all aspects of online civility. The broadcast will stream live on Facebook and YouTube where people can interact and leave comments.

Interactive Billboard campaign across the UK

Across major cities in the UK, digital screens in London, Manchester, Leeds, Liverpool, Glasgow and Birmingham will display social media messages that challenge passersby to think about their own tone online, and to encourage them to consider kinder alternatives. Social media messages will be displayed on interactive digital screens at key sites including London’s Leicester Square and Manchester’s Printworks, which will then transform in real time into alternative messages of kindness – encouraging more thoughtful actions and comments when interacting online.

Throughout Stop Cyberbullying Day, interviews with thought leaders, public figures and influencers will be published exclusively on the Cybersmile website. These expert interviews will explore all aspects of social media, online behaviors and digital civility.

A Stop Cyberbullying Day digital poster contest will be launched online by the One Minute Briefs creative community that will task designers around the world to create and share on social media impactful posters relating to the dangers and effects of cyberbullying.

Gamers around the world will be broadcasting livestreams to promote kindness and inclusion within their communities.

Popular game MovieStarPlanet will encourage players across 16 countries to participate in special Stop Cyberbullying Day activities introduced in-game. The game has over 400 million registered users and is running a Stop Cyberbullying Day themed contest to promote kindness with the winning player receiving a month of VIP access to the game’s premium features.

The Cybersmile Foundation will launch a number of exclusive giveaways throughout the day with opportunities for people to win signed and one-off prizes from global brands and celebrities including Normani, Zoella and Rimmel London.

Public and influencer engagement with the #STOPCYBERBULLYINGDAY hashtag

Social media posts including videos, tweets, selfies and memes will be shared throughout the day by brands, organisations, governments, schools, public figures and internet users. Posts will include the #STOPCYBERBULLYINGDAY hashtag.

How to get involved today

There are lots of ways you can show your support for a kinder, brighter internet without the need for pre-planning. Internet users, brands, organizations and governments are all encouraged to show their commitment to a truly inclusive internet by creating positive content and sharing messages of support and kindness on social media using the #STOPCYBERBULLYINGDAY hashtag.

We want to say a MASSIVE thank you to everybody who has made Stop Cyberbullying Day 2019 not only possible, but also such a massive success – we salute every single one of you! For further information about Cybersmile and the work we do, please explore the following suggestions:

What are you doing for Stop Cyberbullying Day 2019? Share your plans by contacting us or tweet us @CybersmileHQ.