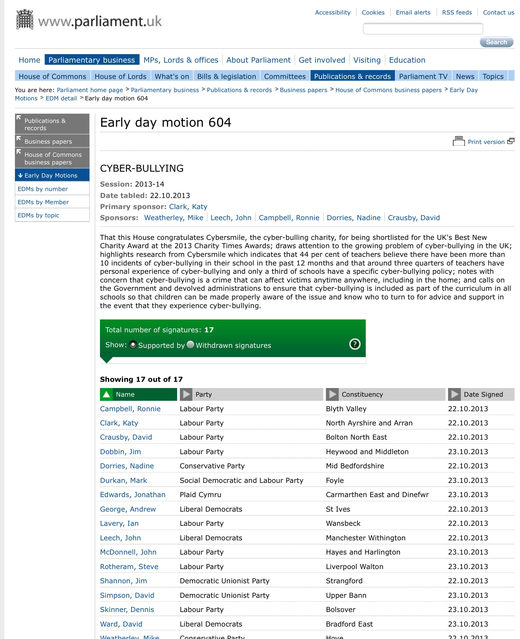 An early day motion in Parliament has congratulated Cybersmile for their achievement at the 2013 Charity Times Awards and signalled the start of a campaign to incorporate cyberbullying in to school’s curriculum.

Early day motion number 604 was tabled by Cybersmile Patron Katy Clark MP and is gathering all party support in Parliament.

Alongside The Cybersmile Foundation, members of Parliament from across the political spectrum have called for cyberbullying to be included as part of the curriculum in schools across the United Kingdom. The campaign follows research conducted by Cybersmile that shows only a third of schools have a specific policy for cyberbullying. Cybersmile founder Scott Freeman said “To be singled out amongst such amazing charities is such an honour in itself, to then be recognised by MP’s from across the UK for the achievement is truly incredible, a big thank you to our Patron Katy Clark MP who tabled the EDM and thank you to everybody else who made all this possible”

The campaign is viewed as vital by Cybersmile in moving techniques to tackle the growth of cyberbullying forward, Scott Freeman commented “By finding a way to incorporate cyberbullying in to the school’s curriculum we would not only be educating children about the dangers of cyberbullying and where to get help, but also what constitutes cyberbullying, this would be extremely beneficial for many children who display cyberbullying related behaviour but often have no idea that they are actually bullying their peers online”

Keep up to date with our campaign by signing up to our newsletter.