The showcase was streamed live around the world through Twitch to hundreds of thousands of viewers.

The charity match in aid of Cybersmile took place on Saturday afternoon at IEM in San Jose and raised the roof through a combination of the exciting League of Legends showcase match and some colourful language from Mark Cuban resulting in a $15,000 fine (doubled to $30,000 after repeating the F-Bomb!) which thankfully comes to us (check out the original announcement of a fundraising match if you missed it).

The actual match was won by #TeamCuban with a particularly strong performance by Voyboy worthy of a mention. With Intel’s fundraising in addition to Mark Cuban’s fines a total of $38,000 was raised for Cybersmile and thanks to the huge exposure that the match has afforded us, there has also been an increase in awareness of our support services that we offer people affected by abuse in gaming around the world. 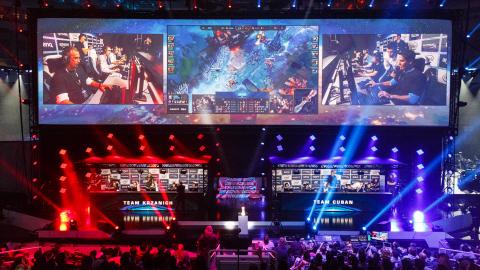 Reaction to the match on social media has been extremely positive with a clear appreciation of the event from many different social media users.

“I’ve been involved in eSports for over a decade. That @LeagueofLegends Aram @IEM was one of the greatest things I’ve ever seen.”

“It was happy, and so are the comments online. Gaming needed this.”

We want to express a HUGE thank you to everybody who made this match possible including everybody at Intel, Mark Cuban, IEM, ESL, all of the players who took part in the incredible match (see the infographic above to see all the players that took part in the game) and of course the hundreds of thousands of viewers and eSports fans who made it such an electrifying experience.

If you are affected by abuse in gaming please visit our Gaming Support Centre or explore our Total Access Support for various levels of support we can offer. For further information about our work see the suggestions below.

Did you see the match? Tweet us your thoughts @CybersmileHQ!