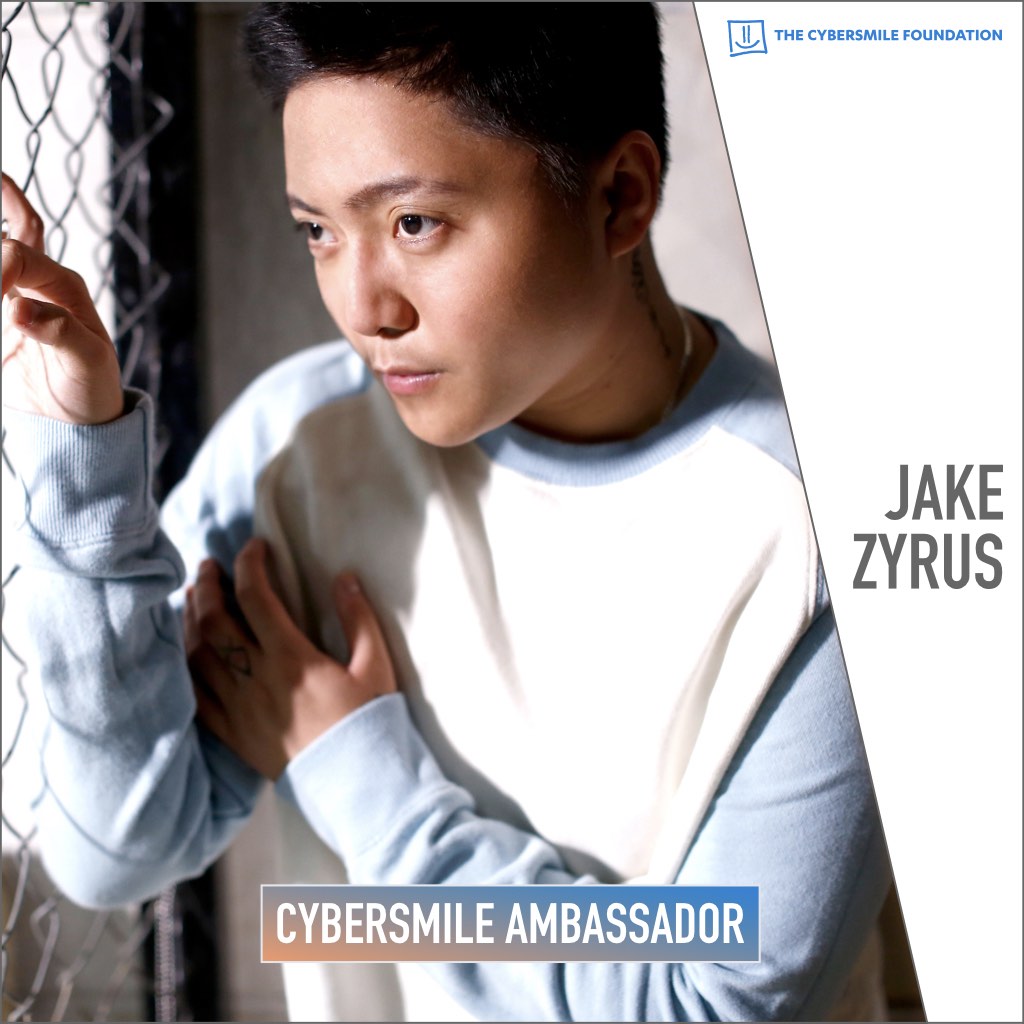 Jake Zyrus aka Charice Pempengco supports the Cybersmile vision of an internet where everybody feels free to express themselves without judgement, ridicule and abuse. If you have been affected by any kind of online negativity, follow the links throughout this article for help and support.

We are thrilled to announce Jake Zyrus as an Official Cybersmile Ambassador, joining our team of global stars encouraging a brighter, more inclusive internet – free from fear, threats and abuse.

Aged 25, Jake is one of the most recognized Filipino music stars in the world, having been discovered on Youtube with exceptional singing talent in 2007. Formerly known as Charice prior to undergoing a gender transition to male this year, Zyrus was hugely popular as ‘Sunshine Corazon’ in the multi award winning television series Glee and was named by Oprah as “the most talented girl in the world.”

“Cyberbullying is only for those who find satisfaction by destroying others and gaining confidence hiding in the dark and anonymity. I am compelled to tell the world that the social media should not be used as a tool to harm and destroy anyone. We should do our best to encourage, to build, and have the eyes to see the beauty and good in any individual.”

Zyrus made global headlines with his vocal talent and was invited for interviews on America’s largest networks. From appearing on The Oprah Winfrey Show several times to sitting on the couch with Ellen DeGeneres, Zyrus was the first Filipino star to break into the American music scene, entering the Billboard 200 Top 10 with his first international studio album. He has also performed with the likes of Celine Dion and for the Los Angeles Dodgers’ 52nd season home opener at Dodger Stadium in front of more than 50,000 people. Some of his recognized performances include ‘Note To God’ and ‘I Have Nothing’ at the Whitney Houston Tribute concert with David Foster.

“Everybody at Cybersmile is extremely proud and excited to welcome Jake as our newest Official Cybersmile Ambassador, we are looking forward to working together in making the internet a more inclusive place, where people can express themselves without fear of bullying, harassment and abuse.”

The transition to male has not been easy for Jake, who has faced online abuse and harassment – part of a bigger problem across the internet, with transgender and identity based bullying on the increase.

In December, Jake Zyrus will be performing a live-streamed concert where part of the proceeds will be donated to Cybersmile – helping us to provide support to victims of online harassment, wherever they are in the world. The ‘I AM JAKE ZYRUS UNPLUGGED’ Digital Concert will be broadcast on Dec. 9, 2017 at 8:00pm (PHT). For further information about the event, please visit www.iamjakezyrus.com.

We are extremely thankful to Jake for agreeing to become an Official Cybersmile Ambassador. We can’t wait to start working with him to make the internet a more diverse environment, by taking the Cybersmile message of kindness, empathy and positivity to millions of people around the world. Remember to follow us on Twitter @CybersmileHQ to hear first about exclusive celebrity giveaways and opportunities to meet our Ambassadors in person! If you would like more information about Cybersmile and the work we do, please explore the following suggestions.

How exciting is this then! Tweet us your thoughts @CybersmileHQ.