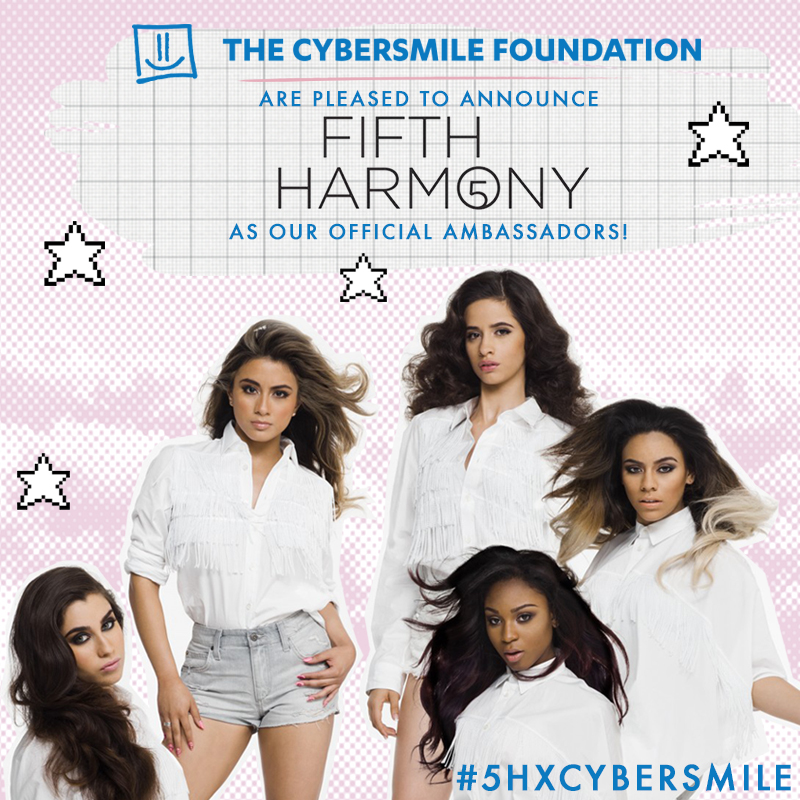 We are delighted to announce that Fifth Harmony have joined our movement for online #POSITIVITY and are now official Cybersmile Ambassadors!

The girls have decided to join forces with us to help combat online abuse and spread the love online! It’s a perfect match – with Fifth Harmony’s uplifting and empowering tunes and our tirelessly positive digital presence, we will reach out to millions of people and help to combat cyberbullying! Keep your eyes peeled for ways to get involved with #5HxCybersmile

“Cybersmile are immensely proud to welcome Fifth Harmony on board as official Cybersmile ambassadors. It’s wonderful that the girls will be using their position as role models to encourage internet users to spread positivity to others. Their support will enable us to promote positive digital citizenship to more people and look forward to working with them to tackle cyberbullying.”

The Cybersmile Foundation will actively encourage a safe and positive environment for children as well as adults with the support of Fifth Harmony, helping people online affected by cyberbullying and digital abuse.

The band won MTV’s Artist To Watch award at the 2014 MTV Video Music Awards and recently performed at the Radio Disney Music Awards, where they were triple nominated. On June 6th they will perform at Capital FM’s Summertime Ball alongside Ariana Grande, Nick Jonas, Rita Ora, Jason Derulo and a host of international music stars!

Exciting news, right?! We can’t wait to get the Cybersmilers and Harmonizers together to spread some online love and get everyone feeling fabulous.

Proud of the girls for helping out such a good cause? Get tweeting @CybersmileHQ and @FifthHarmony and don’t forget to include the hashtag #5HxCybersmile!

Check out 5H on the Ambassadors page of the Our Supporters section – you can also find some incredible Testimonials from real people we have helped!