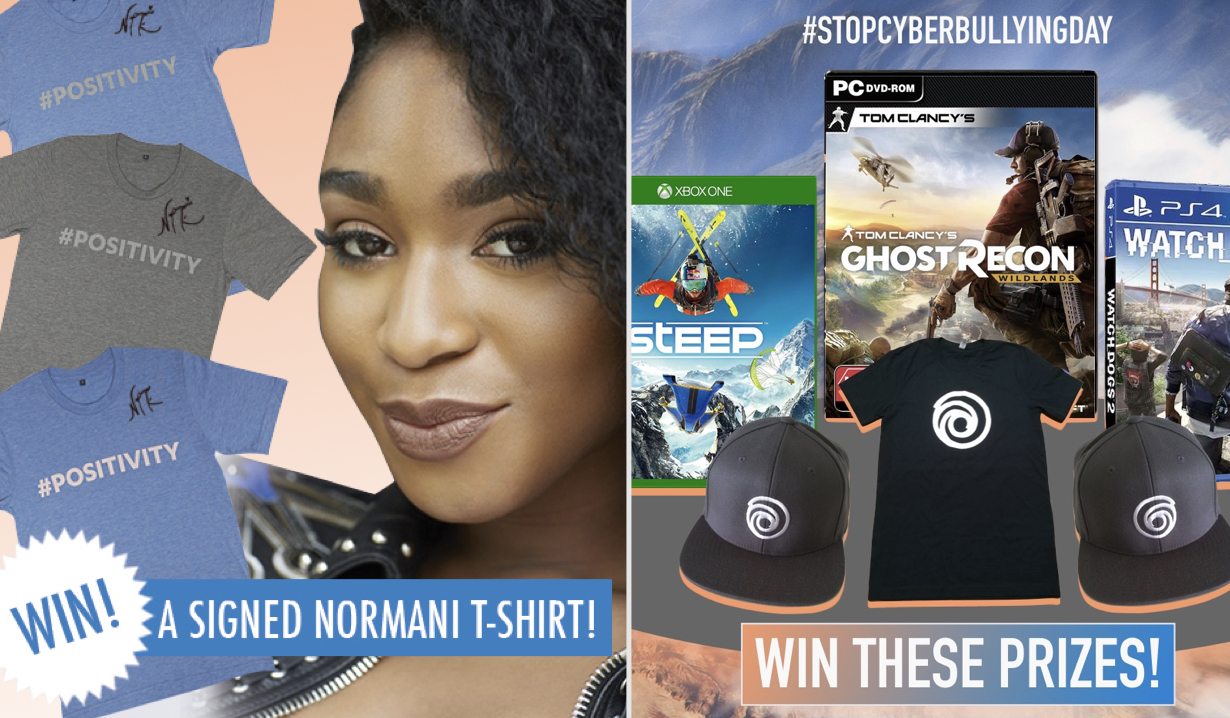 A huge thank you to Ubisoft, Normani Kordei and One Minute Briefs for contributing to this year's amazing giveaways. For more information about becoming Official Partners for Stop Cyberbullying Day 2018, follow the links at the end of this article.

Following on from the huge success of the day itself, we are delighted to announce the winners of our various Stop Cyberbullying Day 2017 contests and giveaways.

For each giveaway we asked people around the world to contribute in celebrating a diverse and inclusive internet by using the hashtag #STOPCYBERBULLYINGDAY on social media – sharing their messages of hope, support and empowerment. On the day itself, we announced 3 different contests alongside our partners and supporters which included – an exclusive games and merchandise giveaway with Ubisoft, a chance to win one of 3 Cybersmile #POSITIVITY t-shirts signed by Normani Kordei and a One Minute Briefs’ design competition.

Loves! Tweet using #STOPCYBERBULLYINGDAY with a positive message to win one of my signed t-shirts! You can enter more than once, good luck! pic.twitter.com/QHygNCSXAC

As usual, the volume of responses to the various contests was overwhelming and we received thousands of entries! Below you’ll find some of our favorite contributions from the day. A huge thank you to all those who shared their messages of positivity and support for an internet without exclusion.

Dont see yourself as the problem, The person who is bullying you is the one with the issue, not you. #STOPCYBERBULLYINGDAY

Always believe in yourself and love yourself the way you’re, because you don’t have to change to be loved! #STOPCYBERBULLYINGDAY

#STOPCYBERBULLYINGDAY you are valued, your feelings are valued and your life are valued don’t give up you are loved

You are beautiful and loved #STOPCYBERBULLYINGDAY

the people who engage in this are insecure about themselves. they hate behind a screen, dont let that get to you. #STOPCYBERBULLYINGDAY

#STOPCYBERBULLYINGDAY The best way to find yourself is cyberbullying, is not supporting the negative comments and reporting

Words don’t have to be spoken aloud to be hurtful to someone. Always think before you type and post. Be considerate. #STOPCYBERBULLYINGDAY

The only person who truly knows you, is you. So, just shrug your shoulders , wear a smile and say “you don’t know me” #STOPCYBERBULLYINGDAY

Always believe in yourself and love yourself the way you’re, because you don’t have to change to be loved! Love always#STOPCYBERBULLYINGDAY

NEVER be afraid to speak up. Bullying is far too common, especially online; as it’s cowardy. Stay strong & voice it. #STOPCYBERBULLYINGDAY

– You’re not a failure.
– You do not need to be afraid.
– You are loved.
– You are not alone.
– I believe you.  #STOPCYBERBULLYINGDAY

#STOPCYBERBULLYINGDAY bullies are just that bullies, acting hard when really they’re anything but. Don’t fear them pity them.

We would like to say a very special thank you to One Minute Briefs, Ubisoft, our Diversity Ambassador Normani Kordei and everybody around the world who participated in this year’s contests and giveaways – we couldn’t have done it without you!

If you would like to align your company alongside Cybersmile and some of the world’s leading brands for Stop Cyberbullying Day 2018, please email [email protected] or check out the becoming an official partner section of the website. For more information about Cybersmile and the work we do, please explore the suggestions below.

What did you do for Stop Cyberbullying Day? Tweet us @CybersmileHQ.