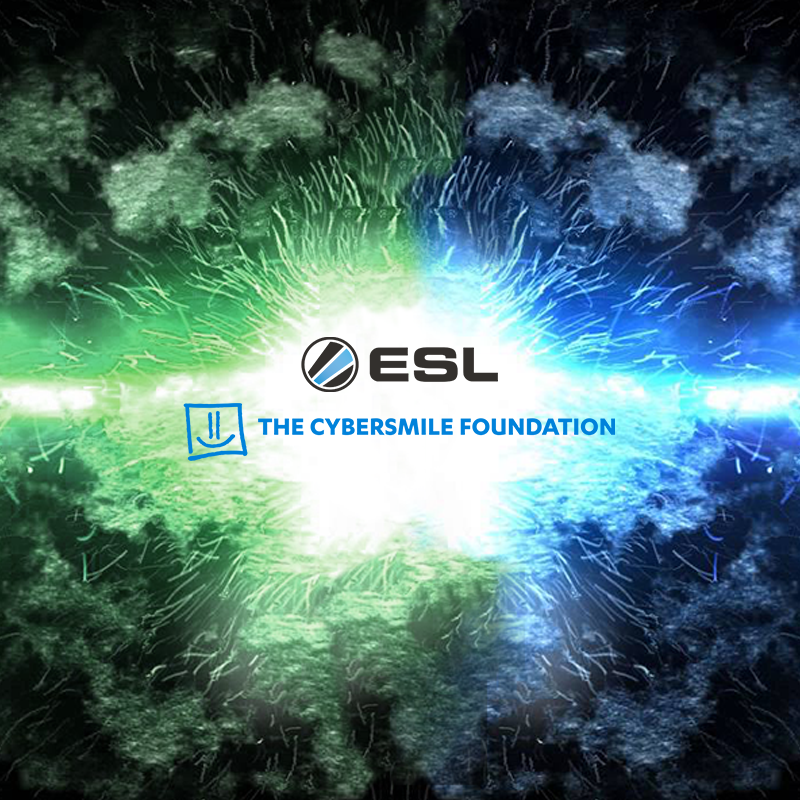 The growth of gaming and esports has seen more people affected by toxic behaviour. Among other things, this partnership will further extend the support facilities available to gamers around the world.

Today, ESL and The Cybersmile Foundation announce the launch of an exciting new partnership that is part of a wider incentive to address toxicity within the gaming and tech industries. ESL and Cybersmile will work to make sure that everyone can enjoy everything that the amazing world of technology has to offer without fear of threats and abuse.

ESL, a part of the international digital entertainment group MTG, is the world’s largest esports company and hosts many of the world’s major gaming tournaments. Hundreds of professional esports teams compete globally every year in fiercely fought contests for huge prizes. ESL is consistently the largest esports content producer on the biggest online broadcasting platforms, including Twitch, Yahoo!, Azubu and Hitbox, with millions of gamers tuning into ESL events, such as the epic Intel® Extreme Masters World Championship in March 2016, which attracted over 113,000 stadium show attendees and 34 million unique online viewers.

“Everybody at ESL is delighted to start working with Cybersmile within this exciting new partnership. Their mission to equip vulnerable gamers and support players needing help with the necessary tools and advice sits perfectly with ESL’s commitment to fight toxicity and cyberbullying in esports and gaming. Exciting times ahead!”

Cybersmile has been working hard to address online abuse in the competitive gaming space since early 2015, forming partnerships and working to develop solutions with leading tech organizations that include corporations such as Intel and Twitter. As a leader in the esports scene, ESL’s support will widen the reach of Cybersmile resources for those who are affected by online abuse and promote positive gaming campaigns and experiences. Cybersmile will also increase its presence at ESL events around the world, further developing its role within the gaming and esports industries.

“Becoming Official Charity Partner to ESL is a perfect fit for Cybersmile. Being able to engage with millions of gamers and the gaming industry as a whole in such a direct way is going to have a huge impact on our mission for truly diverse and inclusive gaming and esports environments.”

As esports and competitive gaming continue to grow, the issue of abuse remains an ongoing challenge for the industry and its players. Hate speech, racism, misogyny, and homophobia are toxic elements that are not acceptable within gaming. This partnership sends out a clear message to everybody – you are welcome here!

If you are affected by abuse in gaming or any other form of online abuse you can visit our total access support section to see the ways we can help you, alternatively you can visit our gaming abuse support center. For further information about Cybersmile and the work we do, please explore the following suggestions.

So, how amazing is that! Tweet us your thoughts about our new partnership over @CybersmileHQ!