Claire's Raise Over $57000 For Cybersmile During Bullying Prevention Month Campaign 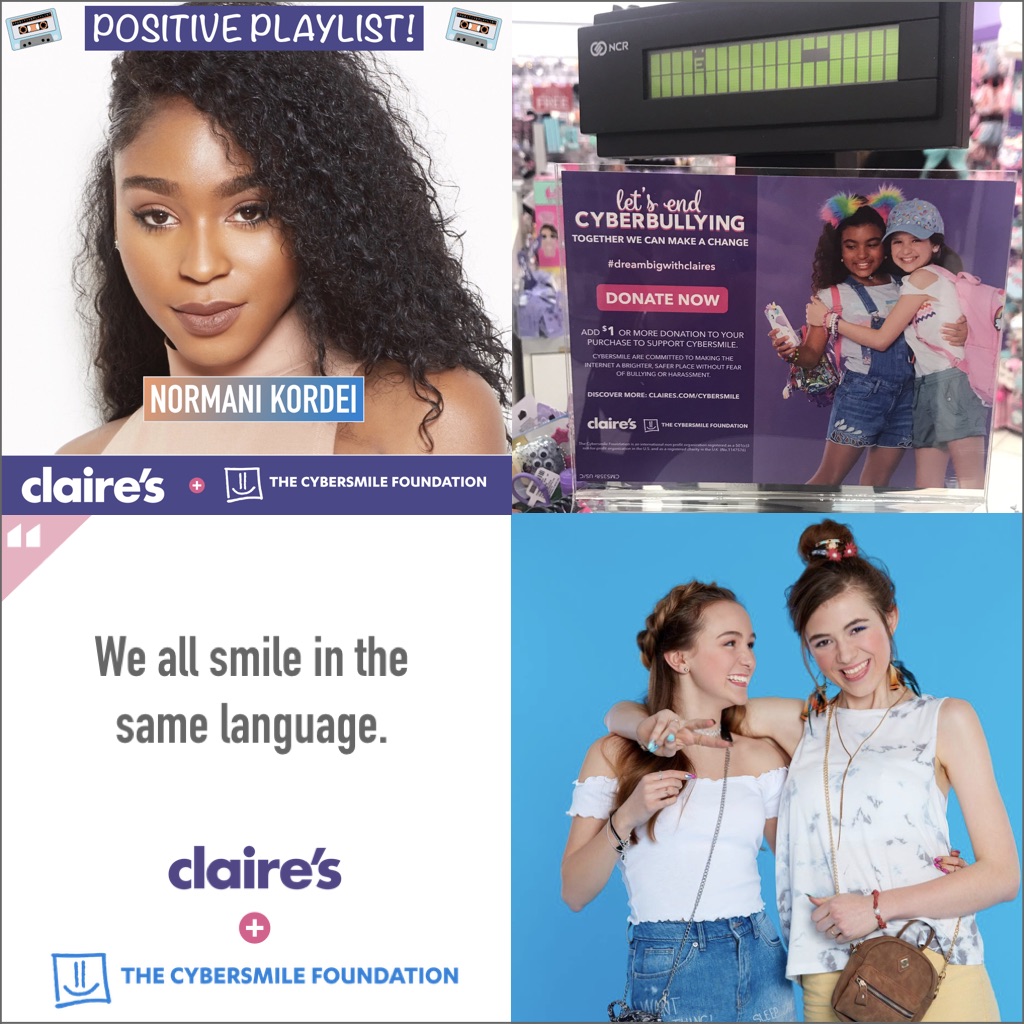 For the entire month of October, Claire's and Cybersmile teamed up to deliver educational and inspiring content while raising money for our Global Support Service, which enables us to offer trained support to young and vulnerable internet users being affected by bullying and abuse.

High street retailer Claire’s have raised over $57000 for Cybersmile after a successful Bullying Prevention Month campaign involving a whole host of Cybersmile Ambassadors, celebrities and influencers!

During the month of October, selected Claire’s stores across North America and the U.K. fundraised for Cybersmile, with customers being encouraged to make a donation at the in-store point of sale. As part of the campaign, Cybersmile and Claire’s engaged young audiences online with positive, inspiring content and shared tips on how to deal with cyberbullying and online abuse.

“Working alongside Cybersmile for the month of October brought awareness and hopefully touched many lives. We are proud of being awarded as the winners of October’s Cybersmiler of the Month Award, our partnership is very important as we work together to end cyber bullying and the effect negativity online has on young girls. We want to share this with our customers by making them part of our mission to make a positive impact and supporting another.”

Throughout the month, exclusive celebrity Positive Playlists were released to engage young audiences, with co-branded, inspiring and educational graphics shared through social media, encouraging young users to #DreamBigWithClaires whilst informing young internet users about the harmful effects of cyberbullying and what they could do to help themselves and others who might fall victim to online abuse.

“Everybody at Cybersmile is hugely grateful to Claire’s for choosing to work with us for their Bullying Prevention Month campaign. Our campaign together enabled us to deliver vital internet safety messages through fun and exciting activities, and the money raised will enable us to deliver crucial support to young and vulnerable internet users around the world.”

To launch the campaign, Cybersmile announced a global giveaway with a number of exclusive Claire’s and official Cybersmile products (including a surprise Cybersmile #POSITIVITY t-shirt signed by Johnny Orlando!) which was won by an entrant from Algeria.

TIP – If you are being bullied online, tell someone! Sharing the problem will help you to feel better. #DreamBigWithClaires @claires pic.twitter.com/epctFacNlA

Normani Kordei, Lauren and Johnny Orlando, Katie Cassidy and Paige Spiranac were among the Cybersmile Ambassadors who participated in the campaign, sharing their tweets, posts of support and Positive Playlists – a selection of their favorite tunes that help them get motivated!

Check out the Positive Playlist I created for The Cybersmile Foundation and Claire's to help fight cyber bullying! 👉🏻 http://claires.com/cybersmile 💜#DreamBigWithClaires

The money raised during the campaign will fund Cybersmile’s Global Support Service, which provides 24 hour support for young and vulnerable internet users – wherever they are in the world (you can hear from some of them here!)

If you are affected by any kind of bullying or negativity online we can help! Visit our Cyberbullying Help Center or our Total Access Support section to find out about all the different ways we can help you with your particular problem. For further information about Cybersmile and the work we do, please explore the following suggestions.

How amazing is this then?!! Tweet us your thoughts about the partnership @CybersmileHQ.