Every Parent's Nightmare: First-hand account of a cyberbullying suicide

This is a first-hand account of the events leading up to the suicide of Thomas Mullaney, aged 15. It has been bravely written by his father, Robert Mullaney, in order to help raise awareness of the dangers of cyberbullying and the devastating consequences it can have for individuals and families. We are humbled and grateful to Robert and Tracy Mullaney for their courage and strength in sharing their heartbreaking personal loss for the benefit of others.

*THIS ARTICLE CONTAINS SENSITIVE CONTENT THAT SOME READERS WILL FIND UPSETTING*

Even at an early age Thomas was a lively, friendly child. He was very much interested in sport activities, which meant most weekends were taken up with either going to football practice or a football game. He was a well-liked child with family and friends, he went to Beavers, Cubs and even learnt how to sail with Sea Scouts. He had a paper round for few years, so was used to going out earning money to buy clothes. He liked branded clothes so we agreed to go halves.

As Thomas got older and went into senior school we started to notice a change in his attitude. He was never nasty, but did become argumentative. Always out and coming home late, some of his friends came from a difficult background i.e. could do or say what they wanted, without any consequences. This affected his school work, to the point where he would be sent home most days. This caused problems at home, as we would go into school for meetings to discuss how to resolve any issues Thomas might have at school. In these meeting Thomas was directly asked if he was being bullied at the school. The reports from other teachers suggest that no bullying was going on, he was just a handful and disruptive in class.

Thomas got into an altercation with a younger boy at school and both boys were sent home. Tracy was notified and she left work early. When she got home Thomas’ Head of Year phoned her and told her what had happened during the day. A complaint was made by the younger boys’ mother that Thomas had marked his neck. As it turned out the younger boy took a swipe at Thomas and Thomas pushed him away. This was witnessed by other pupils and after investigation by the Head of Year she also believed the Thomas never made the mark on the boy’s neck – but had to suspend both pupils until the investigation had finished.

Excerpt of a conversation that took place on Facebook on the evening of Thomas’ death. We have anonymised the transcript, to protect the identities of those involved, as well as blanked some of the expletives used.

When Tracy got home Thomas was on the computer, he was extremely upset at the situation because he was getting blamed for something he didn’t do. We told him we believed him and so did the Head of Year. After a conversation with the Head of Year, we decided to keep Thomas off school for the rest of the week, as the following week we were going on holiday.

Tracy and I had to attend a parenting meeting that evening. Thomas had calmed down a little; we left him with the TV on in his bedroom, the computer on, and he had his iPod on… he seemed fine. That was at 6.30 pm – we returned at 9pm to find all the lights in the house on, all the doors wide open. Went to his room, called his name, no answer. His computer was on Facebook, the TV was still on and chair was in the middle of the room. As if he had stormed out!

On reading some of the posts on Facebook we found a very disturbing converstion going on. This conversation was regarding the altercation at school, with a boy from Year 9. (Thomas was Year 10). Basically this boy had been told what had gone on and not witnessed anything. He took it upon himself and his friends to have a go at Thomas on Facebook. At first, it was in one-to-one messages, then he posted it on the main wall, for everyone to see. At this point all the lads were still online; I posted to him that Thomas had gone and I was going to call the police due to the fact he had threatened Thomas with his friends. His reply was ‘don’t give a F bruv’, and his friends said don’t worry, the police won’t do anything. 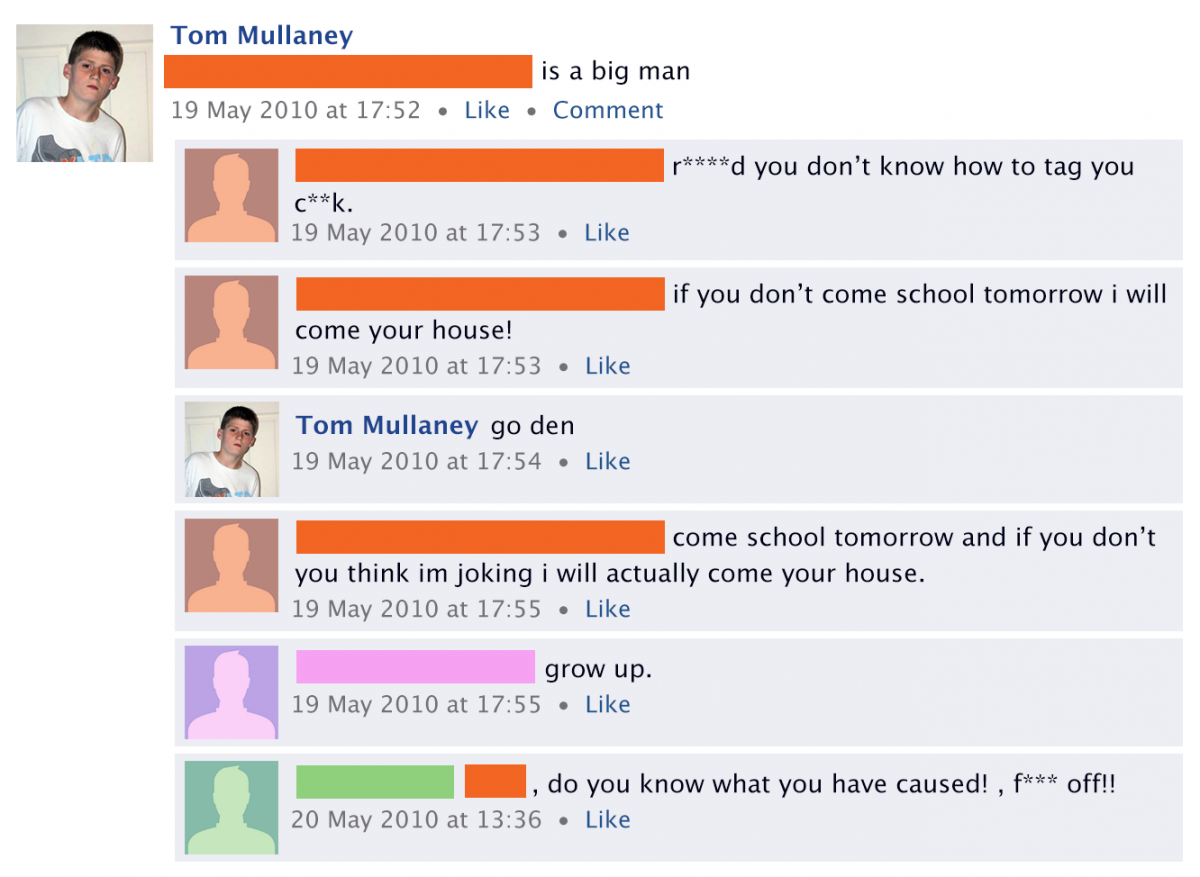 Excerpt of a conversation that took place on Facebook on the evening of Thomas’ death. We have anonymised the transcript, to protect the identities of those involved, as well as blanked some of the expletives used.

Thomas never came home that evening. I waited up until the early hours. He never answered his phone.

I got up to go to work the following morning, still very worried. Tracy asked me to go down the garden to check the sheds, to see if he had crept in and was hiding from me. At first couldn’t find anything, then when Tracy was ringing his phone, I could hear it ringing. I felt relief that he was there somewhere hiding and shouted “Come on, I’m late for work!” No reply.

His phone went again and when I traced the noise it was coming from behind the shed. When I looked behind the shed, I saw Thomas, but I thought he was standing on something. I told him to follow me, and I walked away. He didn’t follow, so I went back to give him a piece of my mind only to release that there was nothing under his feet.

When I looked up I could then see a blue cord around his neck.

I grabbed his hand it was cold and clammy, I then phoned 999.

If you are affected by cyberbullying or online abuse, visit our Cyberbullying Help Center or the Total Access Support section. For further information about Cybersmile and the work we do, please explore the following suggestions.