It is certainly no secret that high school can be one of the most difficult and trying times in a person’s life. The four years brings about countless changes and the demand to make substantial decisions. Amidst the madness of rigorous schoolwork, extra-curricular activities, and adulthood looming on the horizon, high school students are working to discover their identity and place in the world. As a result, teenagers often drag one another down and display negativity toward their peers. This negativity is strikingly visible on social media sites such as Facebook, Instagram, Tumblr, and Twitter. Now more than ever, cyberbullying is a major problem among teenagers. Being a teen myself, I was acutely aware of this issue. While I was never cyberbullied myself, I have had friends that have taken their own lives or harmed themselves as a result of cyberbullying among other things. No one should feel as if there is no one that cares about their well-being.

To combat the negativity, I created an anonymous Twitter compliment account with hopes of making my school a better place. As a shy person, conducting the account in an anonymous manner so that I would not draw attention to myself seemed like the best way to go. Also, I did not want people to see me, I wanted them to see all of the incredible people in our school. @BCHSAnonymous began in January 2014. “My mission?” the biography read, “It’s simple: to spread positivity throughout Boyle County High School.” The account worked to anonymously compliment staff and students. “First compliment goes to @briannlynn98 – she’s an absolute sweetheart. Brianna, your smile and positive outlook doesn’t go unnoticed,” the first complimentary tweet stated. I also sent out messages of encouragement, such as, “If you’re looking for a sign not to kill, harm or insult yourself, this is it. If no one else is telling you they love you, I will.” Several students sent me direct messages expressing how a simple tweet significantly helped them in dealing with serious personal issues and struggles. 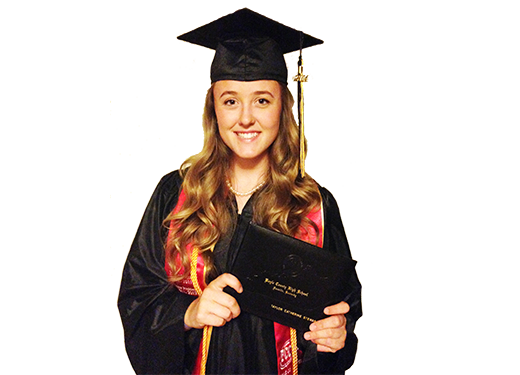 As the year progressed, @BCHSAnonymous gained more and more followers. Staff and students often responded to the account, expressing their gratitude. Never in a million years did I expect to gain so much feedback. Walking through the hallways at school or while sitting in class, I would often hear people speculating who was behind it all. It was quite amusing. It was on my graduation night that my identity was revealed. During the salutatorian’s commencement address, I was announced as @BCHSAnonymous along with the news that a newly chosen tweeter would soon take over and continue the account. The story gained the attention of several media outlets such as Good Morning America and Seventeen Magazine. Since then, countless new Twitter and Instagram accounts have been made to spread positivity in schools across the globe. It amazes me.

An overwhelming response of support came about, and I cannot adequately express my gratitude. This entire experience has been very humbling. I did nothing extraordinary; I only pointed out the remarkable things people were already doing. @BCHSAnonymous was never created so that I may gain personal attention. I wanted to show people that everyone’s individual personalities and talents are valuable. Social media is a powerful, functional tool. It is so simple to use it to make a vast impact in a positive way, perhaps in the form of 140 characters.